There’s A Full Moon Out Tonight 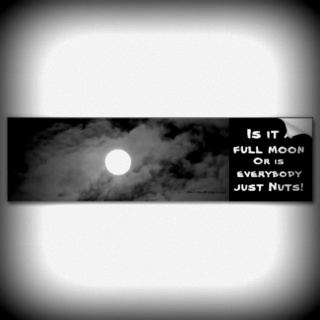 It was crazy at work today. I even asked the teacher I work with if there was a full moon. I meant it as a joke ,but as it turns out,the joke was on us. When I had the chance, I went on Google only to find out that, yes, there is a full moon, and it’s tonight.  Having worked at an elementary school for almost thirteen years, I can usually tell by the way the kids act, if there is a full moon in the vicinity.

This year, I am working with 3 year olds in the Headstart program at our school. They are adorable, and I love them, but man, when there’s a full moon, watch out!  We have more boys, than girls in our class, and I swear the boys were all PMSing today. The whining, crying, and hitting were at an unbelievable high today. Even the boys who are usually very well behaved, have been acting up all week.

By the time I left work today, I had a splitting headache and was so exhausted I felt like a zombie.  So what’s a girl to do? Head straight for Dunkin Donuts ,that’s what. Some people might need Tylenol with codeine after a day like today, but not me. I needed something stronger . Tylenol with caffeine!  A medium iced pumpkin coffee from Dunkin Donuts, along with some extra strength Tylenol should do the trick. And if that doesn’t work, I also bought a vanilla frosted donut as a back-up plan.

As I sit here writing, I am self-medicating with the aforementioned iced coffee. Good thing I have a back-up plan, because I think I might need it. Full moons and 3 year olds are not a good combination. Werewolves might not be so bad after all.