And Now A Word From Our ( Political) Sponsor 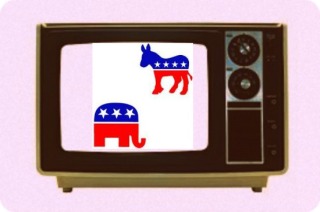 The polls closed, the votes ( at least most of them), were counted, and in the end, President Obama was reelected for four more years. Yet another presidential  election has come and gone. Also gone, those annoying political television commercials that have been inundating us for months.

As the campaign for President wore on, we were subjected to numerous commercials featuring one candidate or the other. In these commercials, they made promises ( that they may or may not keep), and generally smeared each other , all with smiles on their faces.  The commercials seemed never ending and it was enough to make you want to stop watching television until the election was over.

Although the news stations are still analyzing  ( or over analyzing  as the case may be)the results,it’s so good to see commercials for such mundane subjects as groceries, clothing, etc. Television has returned to normal, and I for one, couldn’t be happier. Enjoy it while you can ,because in four years, the craziness will start all over again.

I’m Adrienne Merl, and I approved this blog.